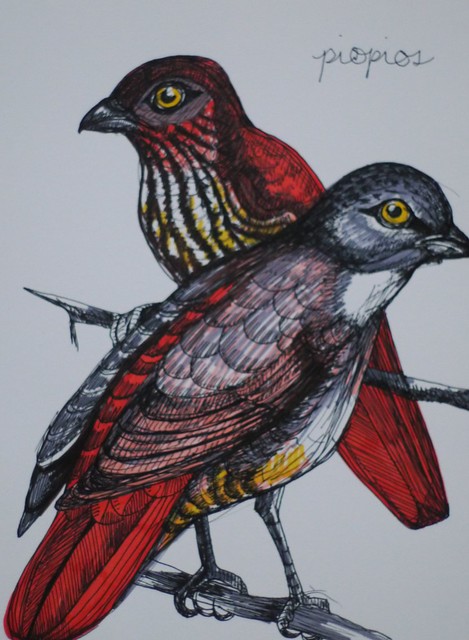 From New Zealand. They liked the forest floor and rooting around in underbrush. They built nests like little cups in trees only a few feet away from the ground. Piopios had a beautiful call, and also often mimicked the call of other birds as well.

Two things did away with them: deforestation, and the introduction of new predators, particularly rats. The islands of New Zealand were relatively isolated and had no native mammals other than bats, which is why the nation is famous for the wide diversity of unique birds that evolved there. New Zealand was a land of birds until settlement by outsiders and when Captain James Cook arrived in the 1770s he described the bird song as deafening. Today the strange, almost blind, flightless kiwi is a national symbol of New Zealand and New Zealanders.

European settlement  in the 19th century brought a lot of change to the island: hunting, clearing of the forest for farming, industrialization, rats and other mammals, and many kinds of birds, almost a third of the original number of species, did not make it through. The last verified North Island Piopio was shot in 1902, although people claimed to have spotted ones as late as the 1970s. The South Island Piopio was last recorded in 1905.